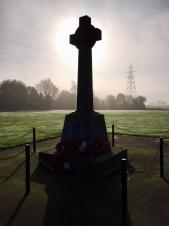 Calow's War Memorial commemorates those who died in during the First and Second World Wars.

The following is from the "Derbyshire Times and Chesterfield Herald" dated 6th November 1920.

A meeting of the Council was held in the Church Schools on Monday. There were present Mr G. Gascoigne (chairman), Messrs GT Barker, W Goodhall, C Simpson and F Parker, with Mr JT Shawcroft (clerk). In connection with the war memorial the council has £90 in hand and two estimates for a Celtic Cross of Stanedge stone on a concrete base were before the meeting, one from Mr Beresford of Belper and the other from Mr Carr of Hasland.

After consideration that of Mr Carr was decided upon. It will cost approximately the sum of money in hand. Work on it to be commenced in March.

Mr Parker proposed that a committee consisting of all councillors present set to work to raise money towards a treat for the returned soldiers and sailors of the village to take place probably in the New Year.

The question of the opening of Eastwood Park on Sundays was discussed, and it was decided that the park should be opened on Sundays, but the swings and other devices for physical exercise should be properly fastened up. The park is not to be open on Sundays until this provision has been made.

What's On in Calow?

Keep up to date with events in the village and the local area.