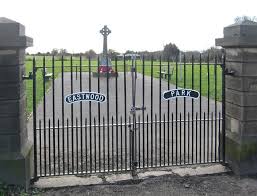 In 2019, Eastwood Park in Calow celebrated its one hundredth year, alongside the bowling green and Calow Working Men's Club (the latter now sadly gone).

After the horrors of the First World War, towns and villages up and down the country felt the need to remember those who had fought. Because many thousands of soldiers were buried on the continent close to where they had fallen ("in some corner of a foreign field that is forever England"), parks and memorials gave people a focal point to pay their respects and remember loved ones.

In 1919, Alderman Eastwood gave 3 acres of land on Top Road (purchased at a cost of £250) to provide a recreation ground in remembrance of the 25 servicemen of the parish killed during the First World War.

Two years later a sandstone War Memorial, now a grade II listed monument, was installed and a bronze plaque affixed listing the names of the fallen. Later a further plaque was added listing the 10 soldiers who had died in World War Two.

Those parishioners around in the 1960s will remember the original playground equipment consisting of swings, a "spider's web" and see-saw. These were located on the left hand side of the park near the "Little Houses".

The Olympic Torch passed through Calow on its way to London for the start of the 2012 games; schoolchildren and locals assembled in the park to wave flags and cheer it on.

In 2014, to mark the centenary of the start of "The Great War" Calow Parish Council planted 25 acers in two rows on the right side of the park. In 2017 new equipment for everyone – young children to adults – was placed down the right centre and in 2018 new gates and fencing were erected.

Three large planters were installed in 2019 which will feature artwork by Calow Primary School and are filled with perennials, herbs and a beautiful, white rose named "Peace".

There are other projects to follow, so watch this space…and here's to the next 100 years. Thank-you Alderman Eastwood. 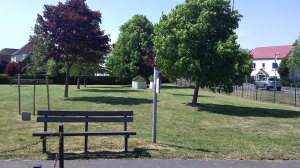