For the last few years, as the number of rats in some parts of Calow has risen, with few sustainable, effective and environmentally acceptable methods of control, it was with some surprise that in Spring 2021, there seemed to be a significant decrease in our local rodent population, as shown by the number of sightings and other clear evidence of their presence. After three years of constant problems, this was a welcome, if rather inexplicable occurrence.

Then my neighbours and I were treated to the wonderful sight of a female barn owl regularly appearing between 6.00 and 6.30 in the morning and again, at dusk. Soon we were getting up early to watch and photograph this magnificent heart-shaped bird as it skimmed over the hedges and undergrowth searching for food. Once it even emerged triumphant from my own large compost bin! It is at least 35 years since I last saw the beauty of this bird `hedge-hopping` and then only down by the Arkwright pub fields.

We also began to hear the regular calls of tawny owls, usually between dusk and midnight. Discovering that a breeding pair of tawny owls needs no fewer than 3000 rodents to feed their young over a complete season, we were pleased that now we had our own environmentally friendly and efficient source of pest control.

We discovered that nearby, in farm buildings, an in-house tawny owl box was occupied, and that, in addition, barn owls were raising their young in the corner of a barn.

Given that Calow Parish Council, is aiming to improve our local natural environment with `green` initiatives, it was suggested that we might erect a ready-made barn owl box to support the resident owl population.

The RSPB was approached with a view to purchasing such a box, but the project was not without its challenges. We were told that barn owls actually need two boxes – one for the male, who likes his own `bachelor pad` whilst being close to his family in a neighbouring tree no less than 20 metres away. Identifying suitable trees on Parish Council land, facing east over farmland, with clear flight pathways and a suitable branching structure, was not easy. It is also illegal to disturb the birds, so a quiet place free from undue human interference was also a consideration.

The two boxes duly arrived in kit form and were easy to construct. However, we were surprised at their size (see picture), and we still face the rather daunting task of erecting them. I am assured by Simon Adin of Garden Flair that this can be done and he hopes to complete the job in early November. The RSPB has supported us with plenty of tips regarding nesting materials, drainage and siting of the boxes and Mr. Hill, the owner of the adjacent farmland has given permission for access, should that be necessary.

There is no guarantee that the project will be successful, but this support for local biodiversity from the Parish Council is a welcome initiative. 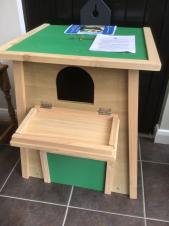 What's On in Calow?

Keep up to date with events in the village and the local area.